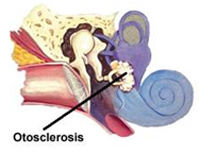 Otosclerosis is a disease affecting a tiny bone in the ear called the stapes, which causes progressive hearing loss or deafness (in one or both ears). In around 70% of cases, otosclerosis is hereditary. In women, the disease usually worsens during pregnancy.

The hearing loss is slow but progressive and usually starts from the age of 25. The loss of hearing is caused by the position of the stapes becoming increasingly fixed (or losing its mobility) due to an abnormal surrounding bone that prevents sounds from being transmitted.

What are the symptoms?

The main symptom of otosclerosis is hearing impairment or progressive hearing loss. On the other hand, a high number of patients develop tinnitus (buzzing and/or similar noises in the ear) at some stage of the condition’s progression.

How is otosclerosis treated?

Otosclerosis is treated with surgery (stapedectomy or stapedotomy), an operation that consists of replacing the stapes (a small flexible bone in the ear, also known as the stirrup) whose position has become fixed, rather than being mobile (causing it to no longer transmit sound) with a prosthesis. The otosclerosis operation does not take long and can be done under local anaesthetic and sedation. After surgery you will only need to spend one night in hospital.

Approximately 90% of patients who recover their hearing after an otosclerosis operation begin to notice an improvement as early as one week after surgery. Around 10% of patients can experience light spells of dizziness or unsteadiness that do not interfere with their everyday activities. In rare cases, the dizzy spells can be more intense and the patient will need to rest for a few days.

The degree of recovery will be lower if in addition to the stapes being affected (a small bone in the ear) there is also damage to the inner ear prior to the operation. In such cases, the fitting of a hearing aid may also be necessary to complete the treatment.

If the otosclerosis operation is not performed, the condition will continue to develop and if the inner ear is significantly affected, surgery will no longer be an option.

Irrecoverable hearing loss after receiving otosclerosis surgery occurs in around 1% of cases, with some patients going on to lose their hearing completely.