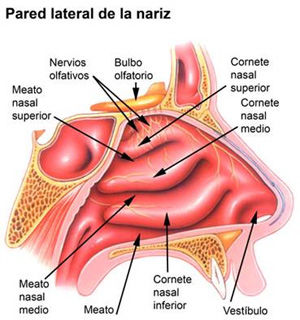 Lateral wall of the nose 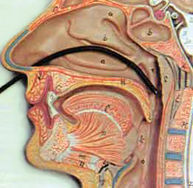 Fig. 1: Radiofrequency energy is sent below the superficial layer of the turbinate.

Fig. 2: The treated tissue is heated to a temperature of 70-75ºC to create a coagulation area.

Fig. 3: During the following three to six weeks, the treated tissue will shrink.

In children, nasal obstruction is usually caused by enlargement of the adenoids, which is frequently linked to hypertrophy of the tonsils. (See Snoring in children and Laser treatment sections).

In adults, there are two main causes, which are often linked:

How is it diagnosed?

It is diagnosed via a nasal endoscopy that is performed at our clinic and causes practically no discomfort. The endoscopy will allow us to see all the structures of the nose and throat (mouth, pharynx and larynx). Also, as the images are shown on a screen, we can explain them to patients and anyone accompanying them during the consultation.

The treatment will depend on the cause.

If the cause is hypertrophy of the turbinates, we suggest reducing their size. This can be done by means of two different techniques:

If the enlargement is moderate, we can reduce the size of the turbinates using radiofrequency treatment, a technique applied under a local anaesthetic at our own clinic (Images 1, 2, and 3).

If the enlargement is severe, we recommend removal via CO2 laser. This is usually performed under general anaesthetic. Unlike other techniques, after which the turbinates can grow back after a couple of years, the result is usually permanent. (Images 4 and 5).

In cases where the nasal septum is displaced, we will perform a procedure called septoplasty to correct the displacement. This allows us to place the septum in a straight position and achieve airflow on both sides of the nose.

If sinusitis is present (either linked to a displaced septum or hypertrophy of the turbinates), we will correct it by means of nasal endoscopic surgery. This allows us to perform the operation without leaving any external scarring. The use of microscopic instruments allows us to prevent complications and causes minimal or zero discomfort after surgery.

If the cause is nasal polyps, we remove them using endoscopic techniques, which leave no scars and allows us to avoid haemorrhaging and postoperative complications. The polyps are removed with a microdebrider, a device which causes no damage to the healthy tissue.

Thanks to the endoscopy technique we can access the inside of the nose and obtain a clear view of its interior.

If we look at the turbinates after surgery (right-hand image) we can now see that there is much more space for the breath. The reduction will last for the rest of the patient’s life. The nasal turbinates will never grow back.

Many techniques for reducing nasal turbinates exist, such as radiofrequency treatment. However, in a case like this, when the turbinates are very large, the appropriate technique is laser-assisted reduction.

In the image to the left, we can see that the turbinate is very enlarged and it leaves hardly any space for breathing, resulting in nasal obstruction.