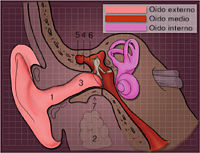 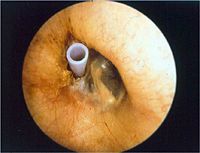 Serous otitis media is the build-up of fluid in the middle ear. It is not usually linked to acute infections although this sometimes can be the case (acute otitis).

Serous otitis media is very frequent during childhood. In children under the age of 5 it is the main course of delayed language development and learning. In other cases, the only symptom will be that the child seems “absent-minded” or “does not pay attention”.

What is the main cause?

The main cause is enlargement of the adenoids, which causes the Eustachian tube to become blocked. This tube is the passage that connects the ear to the nose and it is where a healthy ear will eliminate fluid and therefore prevent its build-up. This build-up of fluid is what causes the hearing loss (between 30 and 40 per cent).

How is it diagnosed?

Serous otitis media is treated by fitting a grommet or ventilation tube. Our team will insert this special kind of drainage tube, made from gold and titanium, to prevent water entering the middle ear; there is no need for ear plugs and the child can swim and bathe as normal. In children, the grommet is fitted under general anaesthetic, and, in adults, under local anaesthetic. After making a tiny incision in the eardrum (myringotomy), the mucous accumulated in the ear is suctioned out and the grommet is inserted, which will keep the middle ear aerated and allow liquid to flow out.

The grommet will perform the function of the Eustachian tube until it can return to normal and, as a result, hearing is fully restored. Moreover, if there is an infection, it too will drastically lessen or even disappear completely after the fitting of a grommet. If the serous otitis media is accompanied by enlarged adenoids, they will also be removed.

What does recovery involve?

Your child will not be able to feel the tube fitted in his/her eardrum and should be able to return to normal activities. If the tube is made from gold and titanium, it can be immersed in water (even during swimming) without the need for ear plugs. The tube will remain in the ear for several months and will fall out by itself when the body has fully rid itself of the serous otitis media.